For developers and coders, Shopify’s app store is the perfect place to showcase their apps – Apps that add value to an online store. This blog is all about how to market your app on the Shopify app store. You wouldn’t want your app to get mainstream downloads when you have dedicated all your time and energy to build one right? To give wings to your app, we have a perfect Shopify app marketing strategy that is bound to put your app in the spotlight. If you’re an aspiring Shopify app developer, then this guide is extremely helpful.

But why Shopify app store? What’s so special about Shopify?

Developing Shopify apps has become an industry in its own right. In fact, Shopify is one of the fastest-growing eCommerce platforms during this digital era. The Shopify app store is home to more than 4000 apps, all designed to help online sellers run their business as efficiently as possible. With 4000+ apps there is an abundance of choice for Shopify merchants and the same is the case for a developer. Thus, it becomes crucial to market your app on Shopify so that it reserves the right spot in the app store.

Before we discuss what’s the right Shopify app marketing strategy, let’s figure out how an app on the Shopify platform gets approved, the right procedure, prohibited actions, and much more. To become a successful Shopify app developer not only strategizing but knowing the basics is equally important.

Every Shopify App Developer Should Know This –

So before we start talking about anything else let’s have a look at the playground Shopify has set for the Shopify app developers.

To begin with, Shopify apps are web applications that add value to Shopify stores. As a Shopify app developer, you can enjoy extensive access to Shopify’s platform. But you cannot just code an app and Shopify will showcase it in its store. Depending on the purpose of your app and how you’re going to market it on Shopify – you need to choose what type of app you’ll build. As a Shopify app developer, you can come up with either of the apps –

Public Apps – If you want your app to be used by as many Shopify merchants, you need to come up with a public Shopify app.

Custom Apps – When you build an app especially for one Shopify store, that’s a custom Shopify app. It’s available only to that one single store for which it was designed.

Private Apps – Are meant for developers to build an app for a merchant with specific requirements not met by the custom apps. 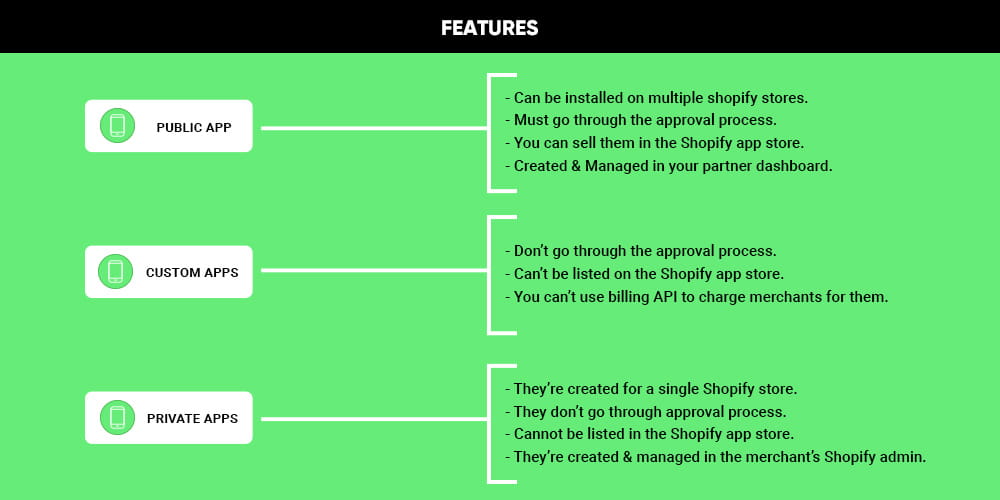 Listed & Unlisted Apps – If you don’t want to make your app visible to online merchants, you can change your app’s status and make it unlisted. Every public app that passes Shopify’s approval is listed on the Shopify app store.

What are the Requirements for Shopify Apps?

So you cannot just code an app and Shopify will welcome it with a kind gesture! All public apps must meet basic criteria (which is the same for listed and unlisted apps). Even if your Shopify app marketing strategy is perfect, if your app doesn’t pass the following checkpoints, you’ll have to re-work the entire thing again –

Ps. We recommend you to go through this page to get a good grip of Shopify’s requirements for an app that showcases it in its app store.

As a Shopify app developer, you need to be exact in terms of what all is required. Once you have included everything in your app, Shopify reviews it. If everything seems to be alright it will be approved. Here’s how your app moved from one stage to another during the review process – 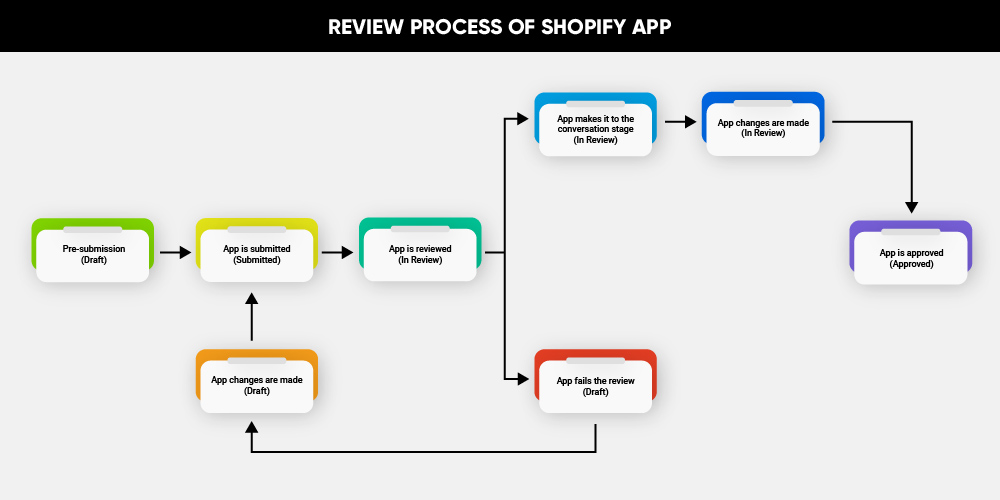 When you submit your app for screening, it moves to the review stage against which you’ll receive an email from the Shopify team. If your app required major changes, you’ll get an email that outlines the required changes. If there are minor changes it moves to the conversion stage.

Once you have made the necessary changes and once it has been reviewed, your app moves to the conversion stage where you can communicate with the Shopify team about your app through ZenDesk.

Now that we have covered the requisites of an app, let’s figure out how to market an app on Shopify.

Unboxing How to Market an App on Shopify –

As a Shopify app developer, you’ve got a number of ways through which you can market your app on Shopify. It’s suggested to have a careful blend of all the tactics in order to come up with an effective Shopify app marketing strategy.

So before we come to a conclusion, here are some add-on tips to market your Shopify app in better ways. While most developers expect the answer to be a “growth hack” but it’s not at all the case.

We have been Shopify experts since 2010 and we are on a constant journey to help Shopify merchants with their eCommerce journey. Not only in the form of store development, but we have also helped Shopify merchants by designing a series of custom apps for them. 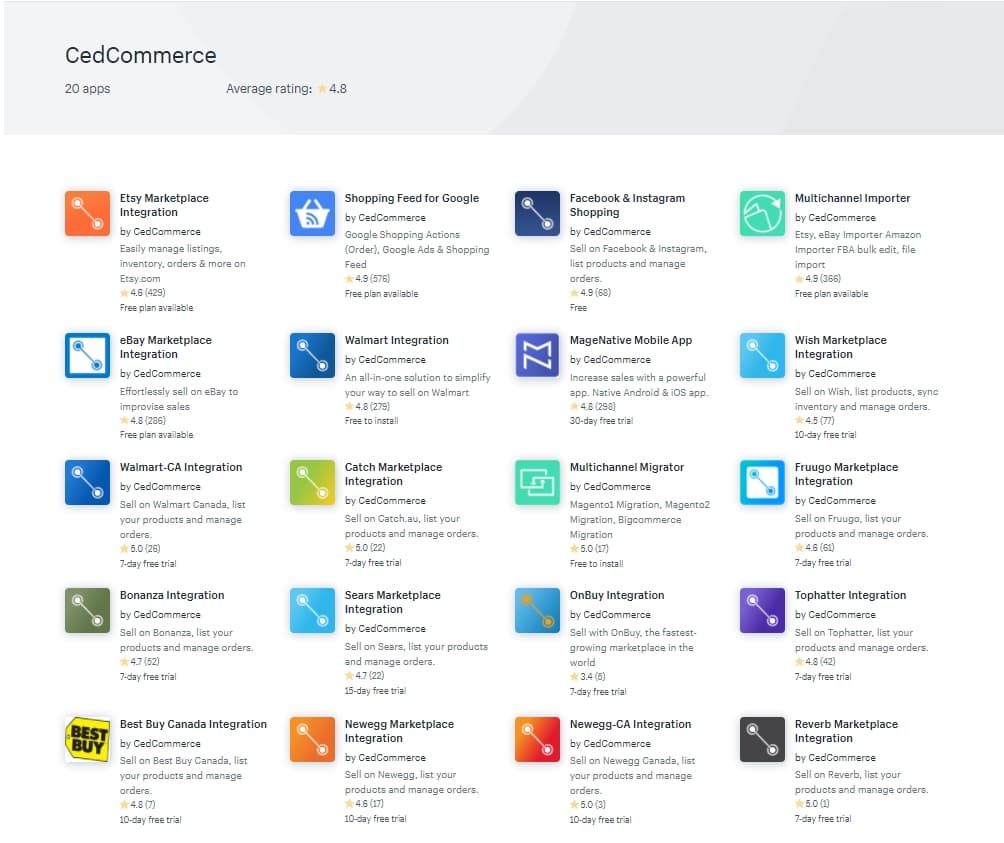 As a Shopify app developer, we always believe in adding value through our apps. Our marketplace integration app bridged the gap between Shopify sellers and global marketplaces.

As a Shopify app developer, if you know how to market your Shopify app, you’re most likely to get all the limelight you always thought of while designing and coding it. A lot of coders usually ignore the Shopify app marketing strategy and rely on organic movements.

This was all about how you can market your Shopify app. Strategizing is always good rather than playing hunches. And we help you to strategize better!

According to research, every year, inventory mismanagement loss costs $818 billion globally. 52% of which is due to out-of-stock products, i.e., overselling...

Here’s a success story of a multi-channel seller, who optimized Inventory and Order Management with CedCommerce’s Integration for eBay. Discover how Pro...

Simple Steps to Becoming a Top Rated Sellers on eBay

When you become a top rated seller on eBay, you open a pathway to one of the best ways to establish credibility...