ShopTalk 2017 Concludes with Great Success: Here are THE major developments:

The ShopTalk 2017 concluded today on the happy note. The event was organized from March 19 to 22 in the dreamy city of Las Vegas. And looking at development, the event was sure not some hit but Major Hit.

This year around 5000+ attendees graced the event and explored the disruptions and revolutions of the retail industry and discussed how the consumers searches, shops and buy.

Brands such as Walmart, Amazon, Google, and Jet, and more were present. Not only were they present, they participated with enthusiasm and launched some of their important products and services. So here is the digest of all the Major Developments:

And the main theme that emerged from that Retail is dying slowly and the technologies and efforts that intertwine online and offline shopping are the future.

The first day was kick started with a startup competition where 15 companies battled for two positions – one jury’s choice and one audience favorite – and $25000.

The four categories to which all the startups belonged:

And the Brief of all the participants: 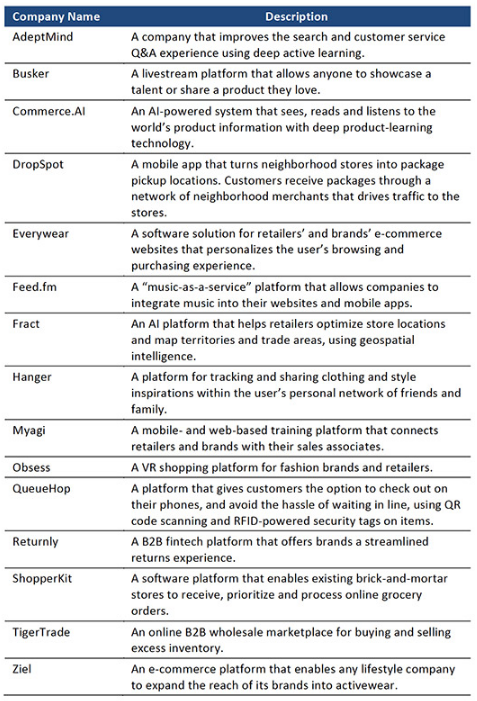 One of the major developments of the event came when Apple Pay executive Paul Gauthier Shared his insights on payments:

"We are staring at a massive opportunity to reinvent retail by digitizing the store" – @PRGauthier #shoptalk17 pic.twitter.com/hMAotCP5HR

The thought provoking Points Raised by Him are:

He advised merchants to focus on Purchase Flow and not on payment flow. Adding, If payment is seamless, it’s invisible

Merchants should focus on purchase flow, not payment flow. If payment is invisible, it's seamless – @PRGauthier @amazonpay #shoptalk17 pic.twitter.com/lIx3z7dRGL

The moment of magic is in the check-in. Knowing what our customers want makes checkout a far less important

“The moment of magic is in the check-in. Knowing what our customers want makes checkout a far less important moment.”@PRGauthier #shoptalk17 pic.twitter.com/B75kA3YK5X

At this, Michelle Evans, Digital Consumer Research at Euromonitor raised an important question with a tweet “But the hurdle is how to do that in an offline #commerce environment. ShopTalk 2017”

But the hurdle is how to do that in an offline #commerce environment. #shoptalk17 https://t.co/VBJC6nqvhd

And, at this Emma Weinbren, news analysis editor at The Grocer seems to have a possible solution, she tweets, “Consumers need a reward or clear reason to adopt mobile payments, say experts from @Google @Alipay @amazonpay and @SamsungPay ShopTalk 2017

At the event, there seems to be a development of the consensus that Retail is slowly dying and it is dire need of new avenues which can revive it and artificial intelligence, visual and augmented reality, drone delivery, and machine learning can become saviors.

Another story that came which almost confirms the prediction of the ebay CEO “ Bebe closing all stores, to focus on e-commerce”

Walmart E-commerce CEO, Marc Lore, declared the launch of “Store No 8” which would fund tech startups working on artificial intelligence, visual and augmented reality, drone delivery and machine learning technologies which can be used across the Walmart.

Some Words of Wisdom:

Some tweets by fract.com which claims to “Increase your market share with Geospatial Artificial Intelligence caught our eyes, especially two tweets,

First one read, “High traffic #location for #retail #popup is great for brand awareness but might be the worst location for other #popup goals ShopTalk 2017”

And Second one read, “Women shop for products with a story and men choose for fast and convenient purchase – keep in mind for #popup #retail strategy ShopTalk 2017”

These are some of the major developments, obviously, there were more major announcement and developments. Looking out the large traction and buzz the Shoptalk created, it only indicated its growing stature of the event.

We congratulate ShopTalk 2017 team on such a phenomenal success and wish all the best for their future event to be held between Oct 9th to 11th at Copenhagen.

Thank for your Interest!

Portland, Oregon [October 12, 2022]: CedCommerce is a leading eCommerce solution provider that has been developing different marketplace modules to enhance sellers’...

Say hello to the new Etsy Sustainability Attributes. Every year, more and more people are adopting a sustainable lifestyle. To meet this...