A Complete Guide On eCommerce In Latin America

Latin America region is a diverse group of twenty eCommerce affectionate countries. It is one of the world’s fastest-growing regions in terms of eCommerce. In Latin America, as much as collate with the rest globally, e-commerce has arrived to stay long. Major economies of the Latin American region include Peru, Argentina, and Colombia, which have been sketching increased attention due to their swift growth and multichannel selling trends.

The biggest propulsion comes from the rapid expansion of marketplaces like MercadoLibre, Amazon, and others. Global eCommerce players are moving towards the Latin American market, as it has demonstrated a strong affinity for digital commerce. There’s a lot to experience and explore about Latin American eCommerce and multichannel trends in the region. Let’s begin with an overview:

An Overview Of Latin American E-commerce 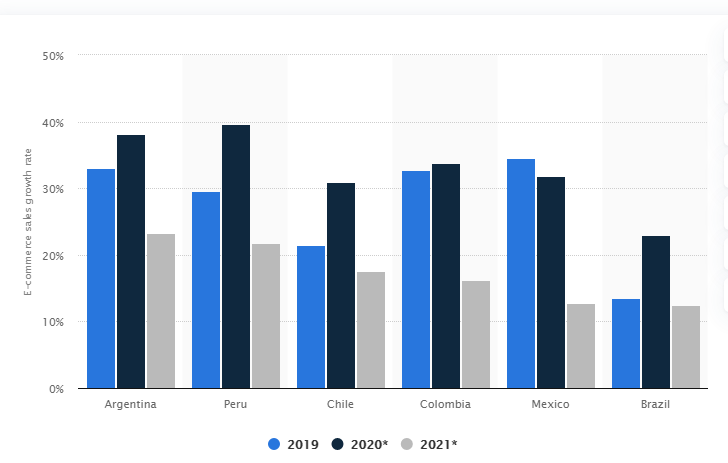 After going through the overview, let’s learn about the latest trends in the region.

Throughout the last few years, Latin America’s population has become more engaged digitally over different online platforms. Here are some of the most common trends in the region.

A large percentage of Latin Americans do not have a credit card. As a result, merchants must have alternative payment methods. To make payment easy and transparent for your customers, look into e-wallets, installment payments, coupon payments, mobile bank transfers, and other funding options.

Latin Americans love to explore multiple channels while selling. Therefore, selling through a variety of channels would allow you to have a seamless shopping experience for your customers while also attracting the most potential customers.

While Latin America has 422.5 million people, only 800,000 speak English as their first language. Getting your site available in multiple languages would also help with SEO and online exposure in the area.

A survey in January 2020 shows that Over 65 per cent of Latin American people use social media. The maximum exposure is in countries including Bolivia, Brazil, Cuba, Mexico, Ecuador, and Columbia. The most widely used social selling platforms in Latin America are Facebook, Youtube, Instagram, and Twitter.

Why Sell In Latin American eCommerce?

Latin American people spend most of their time on online platforms, especially on shopping websites and apps.

The Latin American region is the world leader in eCommerce growth and is likely to grow above the global average of 11%, expected to double in value by the end of 2021. 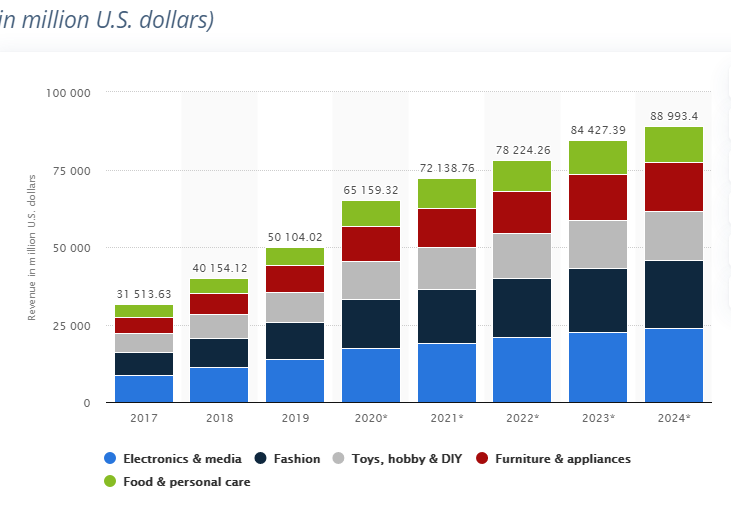 Opportunity to get availed more, Latin America’s middle class doubled in size over the last decade.

Despite being the smallest market among the surveyed countries, one of the fastest eCommerce growing Latin American countries, Chile is expected to see the volume of online purchases double in size by 2023.

Too Easy To establish (Lesser Competition):

The market is still not saturated, making it easier for you to grow your eCommerce reputation.

More internet user penetration is expected to jump to more than 65% around the region.

Latin Americans prefer local marketplaces. Hence it makes it easier for the sellers to set up and scale their stores online.

Due to COVID-19, consumer’s buying behavior changed. The Latin American region reflects a slower take-off for online shopping compared to Europe or North America. The biggest economies in the region are experiencing double-digit sales in the eCommerce vertical.

As per Statista, here are the top-performing marketplaces in Latin America 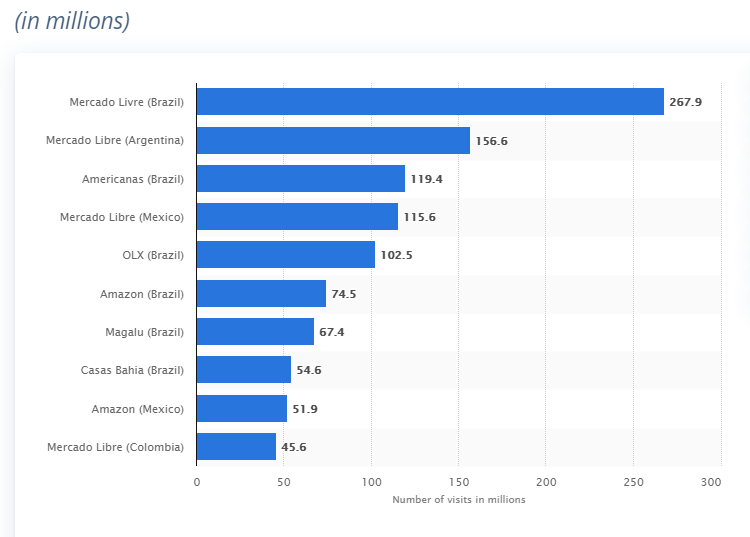 Five marketplaces majorly dominate the eCommerce industry in Latin America. Here is a list of all:

However, the Mercadolibre global-selling program is allowed to sell across the globe to enhance online selling and reach a greater audience.

Amazon is one of the largest online marketplaces among the global eCommerce players in the Latin American region. With Amazon’s new expansion to clothing and footwear in the region, it claims that it will offer more than 3,00,000 products. The Amazon mobile app is one of the most popular eCommerce apps in this region. Amazon is not only the preferred choice of customers but also merchants to sell on Amazon.

The Linio marketplace is another fast-growing online marketplace in Latin America, offering a wide range of products to sell and enhance online business. Linio was launched in 2012, and its presence in eight Latin American markets, including Mexico, Peru, Chile, Argentina, Panama, Colombia, Venezuela, and Ecuador. Managing a catalog of 3 million products over 9,000 marketplace stores, with 4.5 million app downloads. e-Merchants are opting for the best eCommerce frameworks for selling online to get the shoppers to step in towards their online stores.

Push your selling up by integrating your eCommerce store with Linio online marketplace.

The next marketplace on our list of top marketplaces in Latin America is Privalia. It is an online marketplace popular for its fashion and accessories. It was earlier started in Barcelona in 2006. With Privalia, more than 34 million shoppers are getting connected, followed by its expansion in Spain, Italy, Brazil, and Mexico. This marketplace facilitates selling with global eCommerce frameworks like Magento, Opencart, PrestaShop, etc by opting for the multichannel selling model to provide a huge opportunity to the online sellers. It encompasses every element that facilitates selling through this one of the most trending online marketplaces in the online fashion outlet vertical.

Sellers selling on the Wish marketplace have an opportunity to sell in 78 countries worldwide. This marketplace is one of the seller-friendly online selling platforms which charges merchants with pay only when you sell on.

How to sell on all the top marketplaces in Latin America:

You can sell on all these top marketplaces in Latin America using a centralized platform – The Multichannel eCommerce Integration by CedCommerce.

This is an automated tool that interacts with all these top marketplaces resulting in perfect synchronization of product listings, pricing, inventory, and orders. You can sell on all these marketplaces from one dashboard.

Wrapping it up, hoping that the aforementioned piece of information will help e-merchants make their thought process clear with no ambiguity. Latin America is poised to be a future “El Dorado” for online merchants. It has attractive growth rates and rising living standards in the major Latin American countries that are encouraging e-commerce multichannel selling and new services development. So before you start on your Latin American e-commerce business, here are the most accurate facts and market insights you should know before getting involved and paid. Get in touch with us for more information and expert advice on the latest tech and market-leading eCommerce tactics.

Also Read: Expand your selling in the US by selling on the top marketplaces in the USA.

Omnichannel vs Multichannel: How To Drive Growth and Accelerate It...

Omnichannel vs multichannel, the best between the two retail models is still shrouded with mystery. The reasons responsible for the rise of...

A Breakdown of Unfair ChannelAdvisor Pricing and How CedCommerce is...

Starting an eCommerce business is a huge task these days as it needs investment. And when sellers want to grow their business...

Get Rid Of Unfair ChannelAdvisor Commission Rate with Alternatives Like...

ChannelAdvisor is a Saas-based multichannel solution provider that was once very famous among sellers. But with time, merchants realized that the ChannelAdvisor...