How Much Money Should You Put Into Your Ad Campaigns On Facebook?

Businesses like you should never underestimate the value of advertising their products. If you want more people to buy your goods, you need to get the word out, and marketing it through Facebook Ads is one of the most efficient methods.

Promoting your business on Facebook is a great way to reach a wider audience, increase sales, and get new customers. You’ll be able to divide your audience into groups based on their interests, habits, and demographics. However, with tight profit margins, spending money on marketing might be risky, especially if you are a new or small business.

In this blog post, you will learn about the Facebook Ad Budget and how to effectively allocate it for maximum return.

When deciding on your Facebook ad budget, you have two options:

These budget options will help you optimize your hard-earned advertising expenditures depending on the kind of ad campaign you’re running.

You’re probably going to run many ad sets on Facebook simultaneously. While deciding between a campaign budget and an ad set budget, you might come across this question: How much of the entire Facebook marketing spend goes to each ad set?

With the campaign budget, you establish a single budget for all your ad sets and allow Campaign Budget Optimization (CBO), a Facebook algorithm, to figure out how to spend it most effectively. Instead of giving each ad set the same amount of money, Facebook will assess which ad sets will give you the best return on your investment.

In the first example, each ad set has a daily budget of $20 that Facebook spends daily. Each ad set brings in a total of 20 conversions. 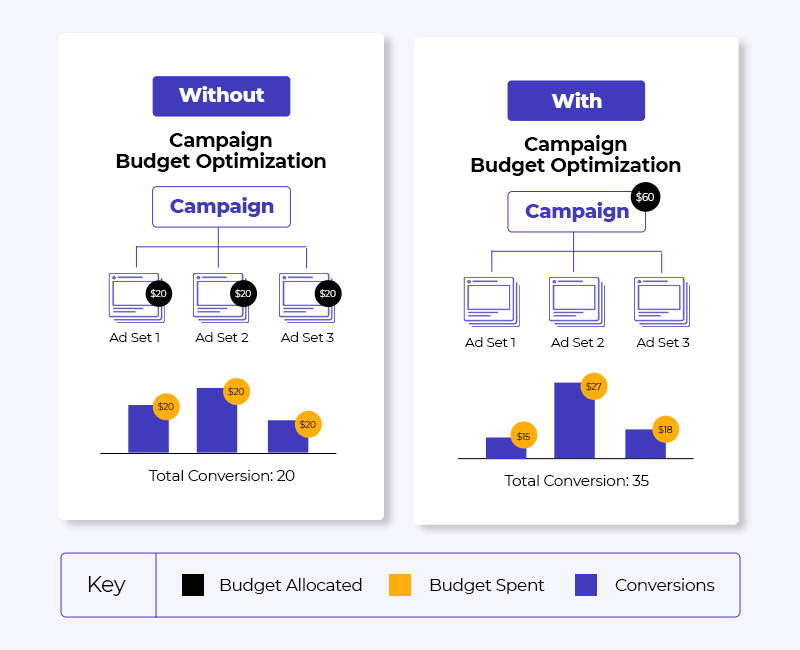 In the second example, you set a campaign-level budget of $60, the same amount as the combined ad set budgets in the first example. Facebook will (in theory) serve it to the ad sets with the most potential, which leads to ad set spend levels of $15, $27, and $18, and a total of 35 conversions.

Campaign budgets are excellent for those who:

With an ad set budget, marketers can decide how much money to put into each ad set.
Because it gives you so much control, it’s great for people who:

Now that you’ve determined how you’ll divide your budget across ad sets, you must figure out how each ad set will spend its budget over time. The term “budget duration” is used on Facebook to describe this.

Lifetime budgets are great for campaigns that have already been set up. First, you put in an end date and the total amount you want to spend. After that, you let Facebook decide when your ads should be shown.

Facebook’s algorithm will decide when to show your ads based on when it thinks you’ll get the most out of them. With this type of budget, the amount of money spent each day will sometimes be very different.

A lifetime budget works best for people who:

A lifetime budget can be the ideal method to get your advertising out there, particularly if you don’t worry about being consistent daily.

With a daily budget, on the other hand, you tell Facebook how much money you want to spend on average every day, and it tries to meet that goal over the course of a week. Facebook is allowed to vary from your average by up to 25% each day if they believe they can achieve greater value for you by rearranging the statistics a bit.

A daily budget is designed for those who:

Each of these budget kinds has advantages and disadvantages, and the optimal one for you will depend on your objectives.

Now that you’ve learned about the various budget kinds, you can start thinking about how to determine your campaign’s ideal budget.

How to Set the Right Budget for Your Facebook Ads?

The right Facebook ad budget helps you reach your marketing goals without overpaying.

Start making a budget by deciding what you want to accomplish with your Facebook ads. Once you’ve decided on a goal, you can start figuring out how much money you’ll need to reach that desired business threshold.

Awareness: When you want to stimulate people’s interest in your products, you must choose the Awareness objective.

Consideration: You select a Consideration objective when you want to attract people who have already shown interest in your products.

Conversion: When you want to target customers at the bottom of the sales funnel, you choose Conversion Objective. They are the ones you want to draw your store traffic or make a purchase from your store.

You’ll choose one of these goals when creating your ad campaign so that Facebook can tailor your advertising to meet your specific needs.

Step 2. Find Out How Much It Would Cost

The Facebook ad system is based on an auction structure. When an opportunity to show an ad to a Facebook user arises, Facebook will conduct an auction among the most relevant advertising, and the ad with the greatest “value” will be shown (a combination of the estimated action rates, bid amount, and ad quality). Facebook ad expenses vary depending on a variety of parameters (such as your aim, target market, time of day, and so on).

The expenses associated with achieving each kind of campaign objective may differ. For example, creating an ad set to maximize impressions will cost you more than merely link clicks.

This implies you must be certain that you are selecting the ideal campaign objective. Picking the incorrect objective could waste your time and possibly cost you money. Begin to envision how much money you’ll need to achieve your objective.

What works on Facebook can only be determined through testing. As a result of testing, you may determine which ads are worth funding and which ones should be shelved.

Beginning with modest ad expenditures for 3–5 days (even $2–$5 per variation would suffice) will allow you to assess the relative success of various ad sets.

The longer the ad is up, the more Facebook will learn about it and refine how it is shown. After five days, you should have enough data to make an informed decision regarding the campaign’s success or failure.

When gauging the success of your advertisement, it is important to keep a watch on the metrics such as CPR, CTM, CTR, and Conversion Rate. You can also check your Ad’s performance through the Analytics feature of the Facebook & Instagram Shopping app. The app pictures everything in the form of pie charts and bar charts, so you can better understand how your ads are performing.

Once you have gathered enough information, you can begin rolling out your ad campaign and observe which advertisements perform well.

However, don’t stop testing and tweaking your ads as your campaign progresses.

Step 4: Ramp up your Ad Expenditure

After around five days, you should know what is working and what isn’t. Now is the moment to back up your words with actions and see your plans through. The Facebook ad manager is where you’ll be able to make adjustments to your advertising budget. When you get there, it’s important to

Keep an eye on how well the ad functions and adjust your strategy accordingly.

Setting your Facebook Ad Budget might seem daunting, but it is one of the most important things to take your business to the next level. However, now that you have learned how to strategize your Ad budget, it’s time to launch your campaign.
Furthermore, if you need any assistance, we are always just a call away. You can schedule a meeting with our social media wizards and launch your Facebook Ad campaigns. 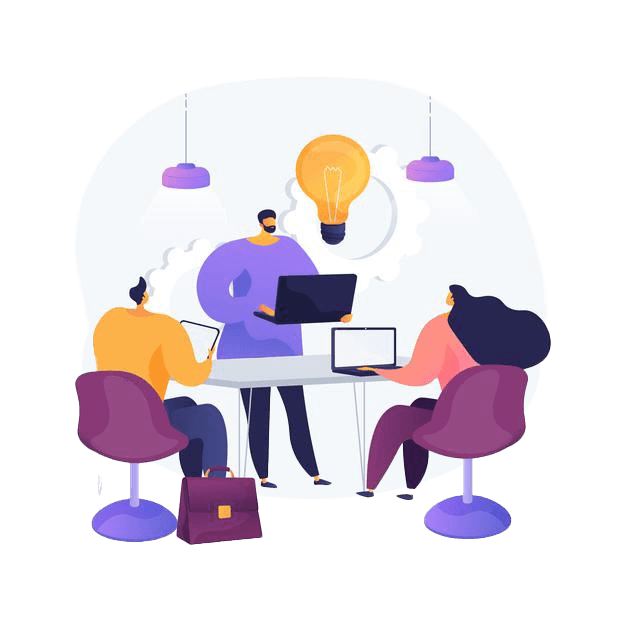 Schedule a meeting with our social media wizards and launch your Facebook Ad Campaigns NOW!

How to Retain Customers and Keep your Sales Up across...

The holidays are a magical time. Businesses are reaping the benefits of consumer spending at this time of year. Sales are pouring...

The merriest season of the year is just around the corner, and shoppers are already buying presents for their loved ones. And,...

Facebook Lead Ads: Here’s everything you need to know!

Growing your business means reaching potential customers before they've made up their minds. The key to getting them is lead generation. Lead...